A series of collages and assemblages of ossip were on display at the Verbeke Foundation in the exhibition Itineris Magna in 2016.

Today, the Dutch artist Ossip is best known for his mobile assemblages made from images taken from medical books and old newspapers. Although some of these works are included in the exhibition at the Verbeke Foundation, it is mainly older and rarely shown works that we have chosen to highlight. A series of minimalist collages/paintings, reflecting the taste of the artist for the game of balance between form and colour; but also a series of drawings, collages and small cardboard sculptures, a genuine cast of characters in bright colours that tell us a story which we are free to invent. There is something of the spontaneity of Art Brut in these early works, a form of art of which Jean Dubuffet said that it made us witness “the artistic operation in its pure, raw state, totally reinvented from all its phases by its author, solely from his own impulses”.

This book gives an impression of the works of ossip between 2014 and 2016. 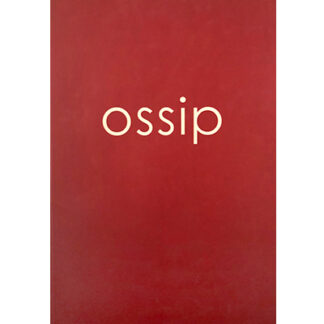