This book was published on the occasion of the placement of Black Meets White at the Verbeke Foundation in 2018. With two works as a starting point, Blue Meets Red and Black Meets White, Johan Opstaele's entire oeuvre is put into perspective.

In the essay Le blanc et le noir, Eugène Ionesco reflects on his own painting. About the position of the black relative to the white and the interplay of the colors, which are not colors. Black: the absence of all color and white: the presence of all colors together. Ionesco must move over his initial fear of the predominance of black to come to the conclusion that the two opposites, black and white, are essentially equal.
…
Black Meets White was built in collaboration with the local population of Leffinge and in 2018 stood in the village for three weeks at the 'Leffingeleuren Music and Arts Festival'.
…
At the end of September 2018, the tower was rebuilt at the Verbeke Foundation. Like a beacon in the landscape.
…
'Black Meets White was born out of the need to work in the public space again. Something I started missing with video installations. The fact that I use this work to revert to a technique that I used in my very first project (Blue Meets Red) and that the two works as the theme are the encounter of opposites, makes the circle as it were round. Both projects resonate with each other and enclose my artistic work over time. That's why they're both included in this publication.
In Black Meets White I have tried to achieve the same simplicity, the same poetry as in my recent video works. My other monumental works have not always succeeded. Maybe my monumental work will finally meet my video work. It's as if so far there were two separate disciplines in me, as if two different artists were living in me and that they have finally become one.'

Note.
On March 8, 2019, the tower was destroyed by a severe storm.
The plan is to rebuild it, including with substantive and financial support from the public, by the end of 2020. 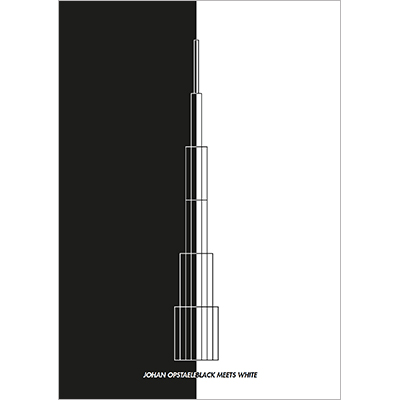