Marinus Boezem, together with the artists Jan Dibbets and Ger van Elk, is seen as the founder of conceptual art and arte povera in the Netherlands. In 2016 La Lumière Cistercian Baudelo Gent 1584 – 2016 was realized in the garden of the Verbeke Foundation. Frans Jozef Witteveen deals with the artist’s world of thought with a focus on this particular work. Peter Bral deals with the history of the chapel.

Suddenly, behind the willows looms, rising high above the surrounding vegetation, an intricate elongated construction of tubes like the skeleton of a prehistoric mastodon. The rationality of the metal skeleton contrasts with the tangle of surrounding vegetation. For a moment, a watery sun breaks through the rain clouds and the wet metal construction shines. Overwhelmed, I approach. At the bottom of the constellation is a large, polished granite slab with rough crumbling edges. In the dark stone with the fossilized remains of the primeand is chiseled in capitals of the strict quadrata antiqua: 1584 “LA LUMIERE CISTERCIENNE” BAUDELO GENT MARINUS BOEZEM 2016. In between the letters is the map of the Baudelo Chapel, a three-headed space with semicircular apsis, divided into seven travees, overseen by cross-rib vaults. When I walk around the construction, I recognize the contours of the floor plan on the stone. A slightly raised concrete edge follows the perimeter of the outer walls of the chapel. The pipe construction in the middle covers the space of the middle ship, the volume of the ship is clearly recognized in the form of the building. The floor of the aisles and the midship is covered with shards of black slate. Trees are planted between the scaffolding. These rapid-growing Italian poplars – Populus Nigra Italica – will quickly turn the scaffold into a tangle of intertwined branches and rods in which the wind has free rein and in the crowns birds build their nests. 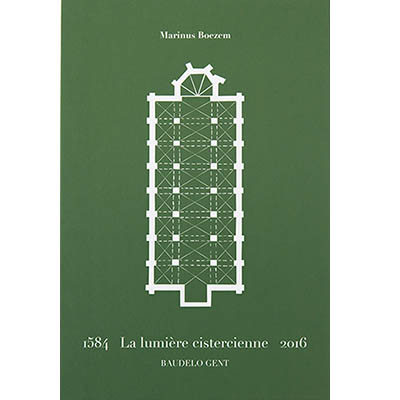