In every Dutch municipality Wim Gijzen photographed himself, with a panorama camera on a tripod, at the Town Board. It is therefore a picture registration of Netherlands in one year, 1972.
In the village or city he bought two postcards, one sent to the then Rotterdam Art Foundation (which at the time made the project possible) and kept one himself. The store where the card was purchased, was photographed as well as the mailbox in which the card was posted.
Per municipality that resulted in a single panorama photo, two postcards – one with the image and one with the address side with stamps – plus a photo of the shop and the mailbox. This is mounted on paper, each of the 863 framed on format 24 x 33 cm. To see is the landscape of the time, the design of the living environment, the clothes, the cars, the small (village) stores, which are now almost all gone, the commercials with the prices and brands, not to mention the countless beautiful old mailboxes of the PTT. And, of course, the 863 postcards with town and village views, squares, stations, churches and other specified buildings, budding new neighborhoods on the outskirts of the city, town and village and other things that he wanted to show, as for example the local traditional costumes. There were 879 independent municipalities in 1972, in 2015 there is that only 393.

In March 2015 a book with all collages in full size is published.
The book is as a paperback or as a Deluxe Edition, in cover and with a map, on sale at the Verbeke Foundation. 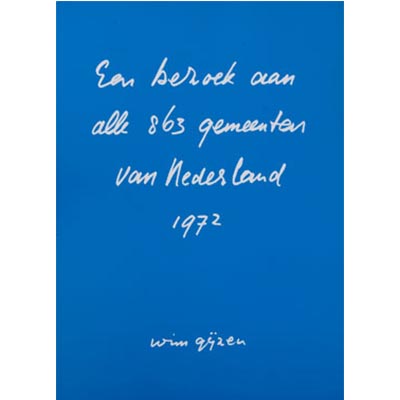