On 24 November 2019, a book on the oeuvre of Frans Neels, entitled Cutting on the sidelines, was published as the 12th part of the series art books by Verbeke Foundation. It highlights his work as a writer, designer and collagist and shows his role within the art world in Belgium.
—
The art of Frans Neels (Ypres, 1935) is as invisible as the artist himself. At a time when everyone can fantasize a upholstered bio on social media, that seems an insurmountable deficit or worse, a glowing reproach of lack of ambition. Not so for Frans Neels, who is in the honorable company of Montaigne. He also published his world-renowned essays in 1580 not as a monument to church or public crossroads, but as a friend service. “It's good that I find a corner in the library or that I'm doing a neighbor a favor to find me again,” he wrote in an introduction.
Neels also thought that way and barely published and exhibited. He has been keeping his consciously reclusive position on the margins for 84 years. He often made his work with a lot of delay in ridiculously low runs. Often it was delivered to friends for free.
So why dedicate a publication to Frans Neels? Because his figure gives a refreshing look at the busy artistic scene in Antwerp from the key year 1958 to today, but also because his conscious attitude on the sidelines is and was a courageous strategy. His path of life crossed that of many fellow artists, but never was he looking for a gangmaker or a fellow warrior. Do something to impress never was his way. The desire to draw his own playing field, no one could take away from him. Looking back, it turns out that desire is a multifaceted adventure with many side paths. It resulted in remarkable texts, collages and works of art that have transcended their initial modesty. 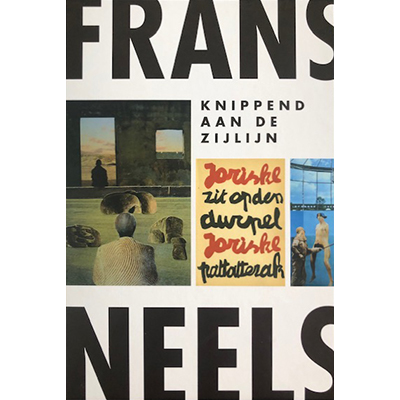