Ignace Schretlen examined drawings and paintings by great apes and compared them to toddler scribbles. Look at scribbles: scribbles of great apes formed the starting point for the exhibition Animal Man Machine at the Verbeke Foundation in 2017. The book shows schretlen’s never-before-fully published collection.
__
After The Biology of Art (1962) by Desmond Morris and La peinture des Singes (1990) of Thierry Lenain is Look at scribbles: Scribbles of Great Apes by Ignace Schretlen as far as known the third book, dedicated to drawings and paintings of great apes. However, the three publications that coincidentally saw the light for a period of 28 years differ substantially from each other in several respects.

For the biologist and artist Morris It was evident that monkeys scribble show that art has a biological origin; Well-known artists such as Pablo Picasso, Joan Miró and Salvator Dalí were seriously interested in this. The Belgian philosopher Thierry Lenain deepened in the history of this subject and comes to an opposing conclusion. Artist and former family physician Ignace Schretlen, who, like Morris, also made great apes scribbles, is behind Lenain in this respect but focuses his attention on a comparison with toddler scribbles.

Central to the new edition is the never-before-published own collection of Ignace Schretlen. This includes monkey scribbles that were made in the period from 1959 to 1998 in various (mainly Dutch) surveys. Some of these have been exhibited in museums in the Netherlands, Belgium and France, and there was a lot of interest of the media and the public. In 2017, the entire collection was first shown in the Verbeke Foundation.

Since animal scribbles have been landed in the commercial circuit and drawing, or animal painting is considered unnatural behaviour, the scientific interest in this has diminished. This is unfortunate because the fascinating history of these studies goes back to the work of Charles Darwin (1809-1882). Schretlen shows convincingly that monkey and toddler scribbles are not distinguishable from each other and wonders how it can be. In this respect, anthropoid and man are side by side!

Ignace Schretlen does not venture to speculation but is limited to what can be said with some certainty about monkey scribbles. The book focuses on the illustrations so that the reader can also draw his own conclusions. The author clearly indicates the point at which the childlike sign development goes through. In passing he pays attention to the painting of elephants and on one of the drawing machines (Métamatic 10) of the Swiss artist Jean Tinguely, who also produces scribbles. 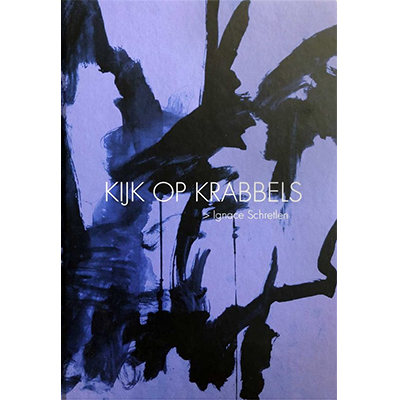